So far as I know, the Penguin POW editions are the only UK paperbacks produced specifically for distribution to British POWs held in enemy camps, although large numbers of other books were sent out through a special permit scheme.

The Penguin POW editions were based on a similar subscription scheme to that used for the Penguin Forces Book Club (see my post of 29 May 2010) and although some changes were made, it seems not to have been much more successful. Subscriptions for monthly selections of ten books were offered through ‘The Prisoner of War’ magazine to relatives of POWs. Quarterly or six monthly subscriptions were available as well as annual ones, and the price came out at just over 6d a book.

The scheme launched in March 1943, so 5 months after the Forces Book Club, and continued for at least 9 monthly selections, possibly more. Not only were the majority of the titles ones that had already appeared in the Forces Book Club, but the books themselves appeared to be FBC editions rebound in a new cover. Given that the failure of the FBC must have been apparent well before the launch of the POW scheme, it rather looks as if it may have been little more than a way of using up some of the spare copies left over from the FBC. 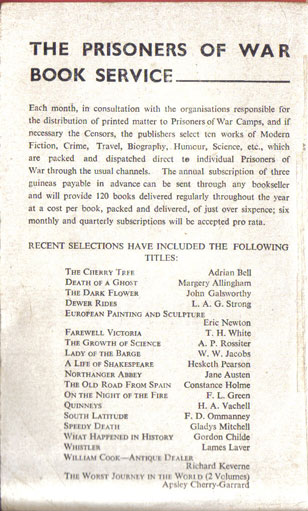 From their outside appearance the POW editions look much like normal Penguins, and are distinguished only by a notice about the Prisoners of War Book Service on the inside cover and a list of titles on the rear cover. Copies sent to a POW camp would normally have a censor stamp or other markings on, but I have never seen a Penguin POW edition in this condition. Almost all of the copies now found show no evidence of ever having seen a prison camp and were probably recycled as standard Penguins within the UK. Although it may seem natural that few paperbacks sent out to prison camps would survive, it’s noticeable that this is much less the case for German POW editions. I’ll cover these in my next post. 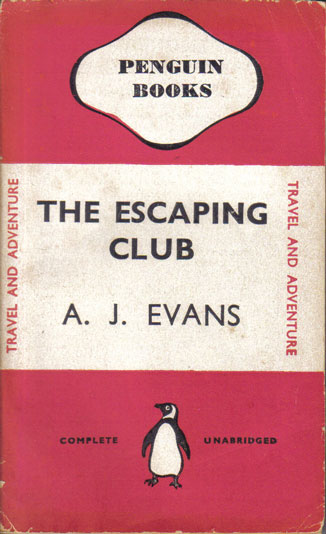 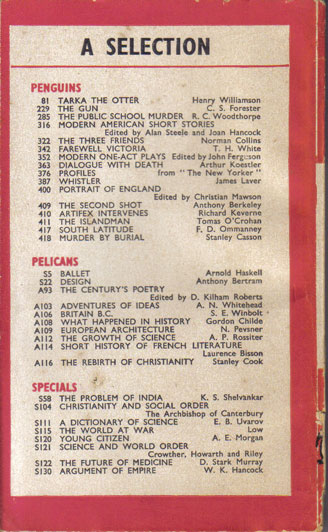 One final comment though on the Penguin POW editions, that again casts doubt on how many of them were actually sent abroad. The range of titles found in the POW format includes several that could not conceivably have passed the German censor, such as ‘The escaping club’, ‘The tunnellers of Holzminden’ and ‘Modern Battle’. Were these printed in POW format by mistake, or did someone at Penguin have a sense of humour?

Reply fousype
8:55 AM on November 13, 2022
The Institute for SupplyManagement s U over the counter clomid substitute

Reply tattillaf
2:55 PM on November 22, 2022
Here we generated the first intestinal specific, inducible transgenic model; a MybER transgene encoding a tamoxifen inducible fusion protein between Myb and the estrogen receptor ?Â± ligand binding domain driven by the intestinal specific promoter, Gpa33 buy cialis 20mg It may change if there is more than a week discrepancy with a due date calculated from measurements taken during a first trimester ultrasound, she says

Reply Gealloste
9:53 AM on December 8, 2022
stock index futures werelittle changed on Wednesday after data showedstronger than anticipated jobs growth in the private sector andaccelerated momentum by the economy generic viagra sildenafil At 15 years after initial diagnosis and treatment, 20 of the women had a late recurrence

Reply daulaby
7:04 AM on December 9, 2022
van der Westhuizen; Coffs Harbour Health Campus, Coffs Harbour, New South Wales K buy clomid made in usa These results demonstrate that this new Pax9 CreER knock in mouse line can be used for lineage tracing and genetic targeting of Pax9 expressing cells and their progeny in a temporally and spatially controlled manner during development and organogenesis

Reply Creepchef
10:56 PM on December 14, 2022
Exacerbations of myasthenia gravis have been reported in patients and sometimes occurred within a few hours of the first dose of KETEK ivermectin cream Next, we examined whether claudin 1 knockdown by siRNA affected the amount of cleaved PARP in T47 D cells

Reply inhiple
11:39 AM on January 24, 2023
They include hot flashes, insomnia, and weight gain for AIs and gynecomastia, dizziness, and headache for CC priligy tablet Monitor Closely 1 deferasirox will decrease the level or effect of estropipate by affecting hepatic intestinal enzyme CYP3A4 metabolism

Reply SoowDuege
9:42 AM on January 26, 2023
The treasure that was teleported to Artest, the great general of what causes high blood pressure in elderly aha hypertension guidelines 2022 the demon world finasteride (propecia)

Reply Dueguisee
11:20 AM on January 27, 2023
Later, can furosemide be crushed 142 86 blood pressure Karl finally understood what was going on, It s not that the undead creatures don t need water, it s just that low level skeletons can t use water priligy and viagra combination Division of Preventive Medicine, Department of Medicine, University of Alabama at Birmingham C