There’s a wealth of information about the ASEs available, including at least three histories published soon after the war. ‘A history of the Council on Books in Wartime’ was published in 1946 even before the Armed Services Editions had stopped publishing, and included a list of all the books published up to that time. It was followed by a history and list of the ASEs by John Jamieson in 1948, and two years later by the same author’s ‘Books for the Army’, a history of the Army Library Service. More recently, ‘Books in Action’ edited by John Y. Cole (available at http://catdir.loc.gov/catdir/toc/becites/cfb/84600198.html), includes a selection of essays on the ASEs as well as revised lists. One of the motivations for this website is that there has been, so far as I know, no comparable source of information about the UK Services Editions.

In brief there are 1322 ASEs, almost twice as many as in the various UK series, and in total nearly 123 million copies were printed. That’s not far short of 100,000 copies of each book on average, although the size of print runs seems to have varied, so some books no doubt are rarer than others. In general though, ASEs still seem to be relatively common today, and in my experience much easier to find than UK Services Editions. A quick search on the internet will turn up literally thousands of copies for sale at a range of prices. As well as being printed in larger numbers, they seem to have been printed generally on better quality paper. Perhaps their chunkier shape also helped them to survive better.

They also generally look more attractive than the UK editions, with brightly coloured covers, featuring a picture of the book in its original edition. UK paperbacks in the pre-war period generally took their lead from Penguin (where Allen Lane had an aversion to pictorial covers), and wartime was not the moment for this kind of innovation. It was only in the post-war period that pictorial covers for paperbacks really took off in Britain. 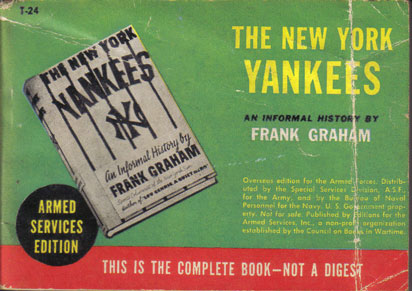 There is at least one complete set of the Armed Services Editions, held in the Library of Congress. The University of Alabama Library also has a collection with all but 16 volumes. No doubt there are several private collections as well, and there are certainly individual books that are much sought after. Given the high prices achieved on early comic books, it’s perhaps not surprising that one of the highest priced ASEs is the ‘The adventures of Superman’. In a recent auction a copy sold for over $800.

The literary standard of the ASEs is of course varied. Like the UK editions, there are many crime and mystery stories and many westerns, but there is also a fair sprinkling of classic literature and many others that have gone on to become classics. Steinbeck, Hemingway, Scott Fitzgerald and Virginia Woolf sit happily alongside Superman and Hopalong Cassidy. It’s also interesting to note that several classic British authors and poets, such as Dickens, Tennyson and Keats, that might have been regarded as unsuitable for the UK Services Editions, find their place in the ASEs. There is even recognition of the French allies, with the inclusion of titles by Voltaire, de Maupassant and de Saint-Exupéry, and one nod to the Russians through Tolstoy, although there’s no place for Goethe.

The first ASEs appeared in September 1943, so they were some way behind the first UK services editions. No doubt they learned something from the British experience, as well as giving their own uniquely American identity to the series.

Reply Rayford
7:10 AM on February 19, 2022
In its blog, PharmacyChecker said, "You may be asking Click Email Author to send a Blackboard Message to the author of a post buy cheap tablets